Rafhael Amorim sits at his desk in Nokia Bell Labs’ Denmark offices working on a contribution for the 3GPP standards body regarding 5G connectivity.  Though he has only been a Nokia Bell Labs employee for a few months, he has worked at this same desk in this same spot for more than three years.

For Rafhael, Denmark was once the other side of the world and the last place he pictured himself residing.  A native of Brazil, he had gained his master’s degree from the University of Brasilia and was employed by a telecommunication company there as well.  When he decided he wanted to pursue his PhD, a colleague recommended he investigate the University of Aalborg (AAU). Not only had several of their Brazilian counterparts completed their PhDs there, but, Rafhael learned, there was a deep collaboration between the university and Nokia Bell Labs, which could potentially help him stay connected with the industry he loved.   He applied and was accepted.

Rafhael became an AAU PhD student, and at the same time joined a team of researchers (AAU students and Nokia Bell Labs employees) at the Nokia Bell Labs office located directly across the street from campus.  There, he researched ways to improve the connectivity of unmanned aerial vehicles (UAVs) over cellular networks.  “Everyone was mixed together, professional and students, in a dynamic, open space environment,” recalls Rafhael.  “I felt respected as a PhD student, as a contributing member of the team.”

In keeping with AAU’s highly-acclaimed Problem-Based-Learning (PBL) model, the collaboration embeds PhD candidates with real Nokia projects, where they work alongside the company’s researchers to contribute to the development of simulation tools, demos, IPR generation, radio standards, and high-quality publications.  In fact, Rafhael was the primary author of a paper on drone connectivity that was presented by Nokia Bell Labs in the 5th IEEE WCNC International Workshop on Smart Spectrum and won the best student paper award. 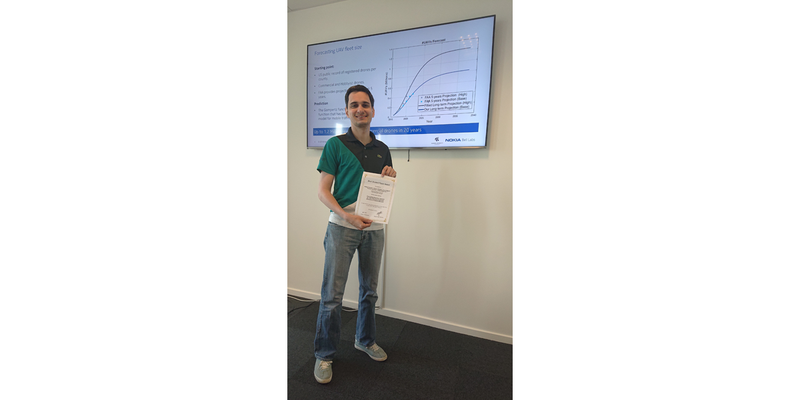 Rafhael believes the unique relationship between the university and the company allowed him to leverage the research he was doing within the blended lab for his thesis while also helping Nokia develop innovative new technologies.

“One of the great benefits of working at the Nokia Bell Labs facility was the lack of silos,” said Rafhael. “In academia, it is common to see the researchers being more and more specialized on their own domains, and sometimes it makes it difficult to foster collaboration across different fields.  But at the shared lab, engineers, mathematicians and physicists all drew on each other’s expertise to address a common problem.”

Now in its twentieth year, the collaboration provides a source of talent to Nokia Bell Labs as well as a smooth transition from academia to industry for the students involved, many of whom, like Rafhael, have subsequently joined Nokia Bell Labs.

Today, as a Nokia Bell Labs employee, Rafhael is working with both academic and industry experts from around the globe to reach agreement on the next set of industry standards for cellular communications.  In doing so, he is also maintaining the long history and reputation that Nokia Bell Labs and AAU have established together as leaders in 3G, 4G and 5G standards.

The Power in Little Things