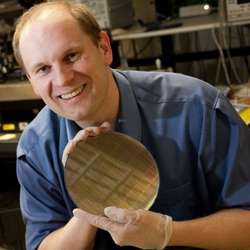 Yves Baeyens received the Ph.D. degree in Electrical Engineering from the KU Leuven, Belgium in 1997. After his Ph.D., he spent one and a half year as a visiting scientist at the Fraunhofer Institute for Applied Solid-State Physics in Freiburg, Germany.

Since 1998, he has been with Bell Laboratories, currently the research division of Alcatel-Lucent. He is now the Director of the High-Speed Electronics and Opto-Electronics Research Department in Murray Hill, NJ. His main research interests are the architecture, design and technology of electronic and opto-electronic circuits for terabit optical and multi-gigabit wireless applications.

Yves Baeyens is a Fellow of the IEEE and was nominated and selected for the National Academy of Engineering 2009 US and 2011 US/EU Frontiers in Engineering Symposia. He authored or co-authored over 100 publications on high-speed semiconductor technologies and circuits.

Since 2003, Yves Baeyens is an adjunct professor at the Department of Electrical Engineering of Columbia University, New York City, NY, where he teaches a graduate course on advanced microwave circuit design.

Silicon Photonics: a Scaling Technology for Communications and Interconnects

Email yves.baeyens@nokia-bell-labs.com Social LinkedIn
Nokia sites use cookies to improve and personalize your experience and to display advertisements. The sites may also include cookies from third parties. By using this site, you consent to the use of cookies. Learn more