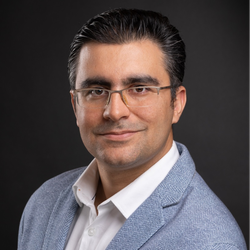 Vahid Aref is a member of technical staff in IP and Optical Networks research lab within Nokia Bell Labs. Dr. Aref earned his B.Sc. and M.Sc. in electrical engineering from Sharif University of Technology, Iran, in 2006 and 2008. He received his PhD degree in computer and communication sciences from École Polytechnique Fédérale de Lausanne (EPFL), Lausanne, Switzerland, in March 2014.

Before Joining Bell Labs, he was a research assistant in the communication theory laboratory (LTHC), EPFL, from 2010 untill 2014. In collaboration with Bell Labs, he conducted post-doctoral research in the institute of telecommunications (INÜ) at University of Stuttgart in 2014. Since 2016, Dr. Aref also serves as guest lecturer at the University of Stuttgart. He has published more than 70 peer-reviewed conference proceedings and articles in prestigious journals such as Nature photonics, IEEE Transactions of Information Theory, IEEE Transactions on Communications and IEEE/OSA Journal of Lightwave Technology. Dr. Aref is the recipient of best journal award  2018 (ITG-Preis 2018) from German Society of Information technology (ITG) for his work on Nonlinear Frequency Division Multiplexing for nonlinear optical fiber communication.

Email vahid.aref@nokia-bell-labs.com
Nokia sites use cookies to improve and personalize your experience and to display advertisements. The sites may also include cookies from third parties. By using this site, you consent to the use of cookies. Learn more