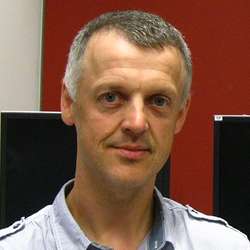 Rudi Broos holds a MSc in Electrical Engineering (KULeuven, 1996), a MSc in Industrial Sciences (KIHAntwerp, 1993) and a postgraduate in marketing telecommunications. (INSEAD Paris, 2001).

Rudi is involved as facilitator in multiple phases during the creation of breakthrough innovations at Bell Labs. At the inspiration stage, he is formulating innovative future ideas and application concepts for a world in 2020 and beyond. During the research phase, he advocates intrapreneurship and design thinking to bring the best of start-up thinking into the corporate research center. Once proto-solutions are available, he proudly markets and communicates these achievements both internally and externally to reinforce brand visibility and thought leadership.

Prior to his current role, Rudi was is in charge of a grassroots business plan competition for Alcatel-Lucent employees in Europe Middle-East & Africa, the so-called “Entrepreneurial Boot Camp”. He worked between 2004 and 2009 as Triple Play marketing manager for Alcatel where he focused on IPTV, advertising & entertainment applications. Between 2002 and 2004, he worked as an Alcatel consultant with operators in Central and Eastern Europe on how to successfully introduce broadband services. Between 2000 and 2002 (until the Internet bubble burst), he was product manager in an internal venture, which developed a software platform that enabled innovative applications over DSL networks.

Almost two decades ago, Rudi joined Alcatel at the Research and Innovation center. He implemented a Java-enabled mobile and intelligent agent platform. He was also active in the Voicebrowser working group of the W3C standardization body and he holds several patents on agent technology and quad play applications.

Interactive multimedia broadcasting system with dedicated advertisement channel - US 20070199036 A1

Email rudi.broos@nokia-bell-labs.com Social Twitter LinkedIn
Nokia sites use cookies to improve and personalize your experience and to display advertisements. The sites may also include cookies from third parties. By using this site, you consent to the use of cookies. Learn more