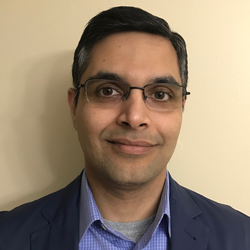 Prasanth Ananth is a researcher in the BHAG Realization Lab at Nokia Bell Labs. His current research focuses on aerial/ground robots, wearable devices, and other cyber-physical systems that are supported by cloud computing and that operate over advanced wireless communication networks.

Previously, he was with the Access Lab at Nokia Bell Labs, where he worked on technology and architecture innovations to realize future broadband access networks that are converged, virtualized, and programmable. He led the Fixed Access Networks Focus Group in GreenTouch with the mission to improve network energy efficiency between 2013-2015. Prior to that, he was a Post-doctoral Fellow in the Wireless Networking and Communications Group at the University of Texas at Austin between 2009-2010, and a summer intern in the CTO group at InterDigital in 2005. He received the B.E. degree in electronics and instrumentation engineering from Birla Institute of Technology and Science, Pilani, India, and the M.S. and Ph.D. degrees both in electrical engineering from the University of Maryland, College Park.

Email prasanth.ananth@nokia-bell-labs.com Phone +1 908-324-1662 Social Twitter LinkedIn
Nokia sites use cookies to improve and personalize your experience and to display advertisements. The sites may also include cookies from third parties. By using this site, you consent to the use of cookies. Learn more