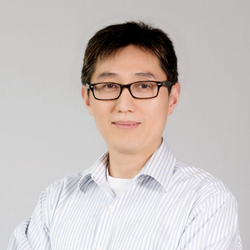 Dr. Po Dong currently works as the department head of the silicon photonics group at Nokia Bell Labs. He received his PhD degree in electrical engineering from McGill University in Montreal, Canada. Before Bell Labs, he worked as a principal engineer at Kotura, Inc. He has been working in the field of silicon photonics for more than ten years and has contributed to critical breakthroughs related to energy-efficient silicon photonic devices for chip-scale interconnects and high-capacity photonic circuits for telecom/datacom applications. He has authored or coauthored about 180 journal articles and conference publications as well as three book chapters. He has worked as an associate editor of Optics Express for six years and has served as a committee member or chair for conferences such as the Conference on Lasers and Electro-Optics; the Integrated Photonics Research, Silicon, and Nano-Photonics Conference; and the Optical Fiber Communication Conference. He is a Fellow of both IEEE and OSA.

Email po.dong@nokia-bell-labs.com Phone 732-829-8275
Nokia sites use cookies to improve and personalize your experience and to display advertisements. The sites may also include cookies from third parties. By using this site, you consent to the use of cookies. Learn more