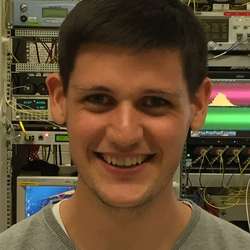 Philippe Jennevé has joined Nokia Bell Labs in the IP and Optical Networking Research Lab in Paris-Saclay, France in 2013 first as a PhD candidate and now as a permanent researcher. He completed his Ph.D. in 2016 jointly with the University Paris-Saclay, the Institut d’Optique and the Laboratoire Charles Fabry, France. His thesis focused on experimental characterizations of physical transmission impairments and the design of performance estimator for elastic optical networks. In 2013, he received a Master of Engineering in Optics and Photonics from the Institut d’Optique Graduate School. Part of his study, in 2012, he designed and realized an optical dipole trap for quantum optic experiments at Rice University, Houston, TX. Philippe will work on new measurement technics of optical distortions, enabling the optimization and the monitoring of optical networks.

Establishing and designing physical models for new coherent optical fiber communication systems.
In close interactions with the Nokia Business Division on the design of optical networks to improve transmission quality predictions and dynamicity.

White Laser Project: build a white laser through the combination and optimizations of three commercial sources and improve them for laser shows.
Team project, realized in collaboration with the Institut d’Optique.

Email philippe.jenneve@nokia-bell-labs.com Website web.phluxy.net Social LinkedIn
Nokia sites use cookies to improve and personalize your experience and to display advertisements. The sites may also include cookies from third parties. By using this site, you consent to the use of cookies. Learn more