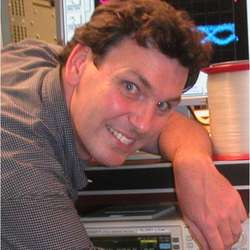 Peter J. Winzer received his Ph.D. in electrical engineering from the Vienna University of Technology, Austria, in 1998. Supported by the European Space Agency (ESA), he investigated photon-starved space-borne Doppler lidar and laser communications using high-sensitivity digital modulation and detection. At Bell Labs since 2000, he has focused on various aspects of high-bandwidth fiber-optic communication systems, including Raman amplification, advanced optical modulation formats, multiplexing schemes, and receiver concepts, digital signal processing and coding, as well as on robust network architectures for dynamic data services. He contributed to several high-speed and high-capacity optical transmission records with interface rates from 10 Gb/s to 1 Tb/s, including the first 100G and the first 400G electronically multiplexed optical transmission systems and the first field trial of live 100G video traffic over an existing carrier network. Since 2008 he has been investigating and internationally promoting spatial multiplexing as a promising option to scale optical transport systems beyond the capacity limits of single-mode fiber. He currently heads the Optical Transmission Systems and Networks Research Department at Bell Labs in Holmdel, NJ. He has widely published and patented and is actively involved in technical and organizational tasks with the IEEE Photonics Society and the Optical Society of America (OSA), currently serving as Editor-in-Chief of the IEEE/OSA Journal of Lightwave Technology. He was Program Chair of the 2009 European Conference on Optical Communications (ECOC) and Program Chair and General Chair of the 2015 and 2017 Optical Fiber Communication Conference (OFC). Dr. Winzer is a Clarivate Highly Cited Researcher, the only one from industry in the Engineering category in 2015, a Bell Labs Fellow, a Fellow of the IEEE and the OSA, and an elected member of the US National Academy of Engineering. He receiver a Thomas Alva Edison Patent Award in 2017 and is the recipient of the 2018 John Tyndall Award.

Elected Member of the US National Academy of Engineering (2017)

Email peter.winzer@nokia-bell-labs.com Phone 732-888-7210
Nokia sites use cookies to improve and personalize your experience and to display advertisements. The sites may also include cookies from third parties. By using this site, you consent to the use of cookies. Learn more