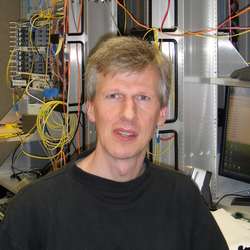 Peter Vetter is Head of the Fixed Networks Program in Bell Labs and based in Murray Hill, NJ. He leads research on optical and copper access, access hardware platforms, and access architectures in Antwerp, Murray Hill, Shanghai and Stuttgart.
During his career, he subsequently worked on liquid crystal displays, optical interconnections, optical access, access systems, access architectures, and green access networks. Under his leadership, he and his teams have realized several world-first system demonstrations, including SuperPON, XG-PON2, green Bi-PON, TWDM-PON, XLG-PON (40G-TDM PON) and XG-Fast (10G-DSL). He also initiated and managed research on GPON, NG-PON2, and Ethernet Access Node architectures, which became the basis for successful Alcatel-Lucent products.
He received the degree of Physics Engineer from Gent University (Belgium) in 1986 and a PhD in 1991. After a post-doctoral fellowship at Tohoku University (Japan), he joined the research center of Alcatel (now Alcatel-Lucent) in Antwerp in 1993, first as researcher and later as research manager.
In 2000, he became co-founder and R&D lead for the PON technology in an internal venture that produced the first FTTH product in Alcatel.
From 2004-2008, he started and managed IST MUSE, a major European project awarded more than 35 Million Euro funding and covering all aspects of broadband access.
In 2009, he moved to Bell Labs in Murray Hill, New Jersey, where he first became Department Director of Access Systems. Since 2013, he has assumed global responsibility for research on fixed access networks in Bell Labs.
He has authored or co-authored more than hundred international papers, including several invited and tutorials. He has served in the technical program committees of ECOC, OFC, NOC, and BB Europe.

(Author or co-author on more than hundred international publications in total.)