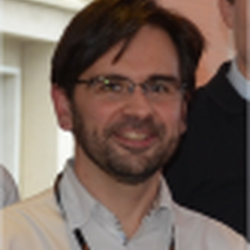 Nicolas Le Sauze is a senior researcher within the Network, Algorithms, Protocols & Security program in Alcatel-Lucent Bell Labs France. He joined the Alcatel corporate research center in 1998 to work on optical packet switching.

From 2000 to 2006, his research focused on optical Ethernet solutions for metropolitan networks, first proposing and leading studies on the DBORN (Dual Bus Optical Ring Network) concept, and then working with the Optics BU on the WPON (Wavelength PON) concept for backhaul networks.

From 2006 to 2013, he has been research manager with Alcatel-Lucent Bell Labs in Villarceaux, leading a group dealing with Ethernet/IP technologies for metro networks and Inter-Carrier architectures. He also acted as project manager for European Funded Research projects. From 2006 to 2008, he has coordinated the CELTIC TIGER project which received the CELTIC gold award in March 2009 for its contributions and impact on Carrier Grade Ethernet Technologies.  From 2010 to 2013, he has led the FP7 ETICS project aiming at providing solutions to negotiate QoS connectivity services in inter-carrier network environments. His role has also included many interactions with main EU carriers, as well as with ALU public affairs and EU regulators to promote the use of Assured Service Quality connectivity services.
Since beginning 2014, his research interests include the home network management in particular considering the upcoming impact of the Internet of Things. Following his research performed in ETICS, he is still looking at solutions to improve the QoE of services provided to end users (now in homes, and between homes) and how to help operators to recreate value from their network infrastructure.

He authored or co-authored around 30 technical papers in International Conferences or journals, and around 30 patents in the field of packet networks.

2009: As project manager for the TIGER project, he received the CELTIC gold award from the CELTIC office.

Email nicolas.le_sauze@nokia-bell-labs.com Phone +33646291763
Nokia sites use cookies to improve and personalize your experience and to display advertisements. The sites may also include cookies from third parties. By using this site, you consent to the use of cookies. Learn more