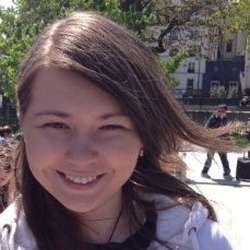 Natalya Rozhnova is a research fellow in the IoT-Control team within the NAACS Lab in Paris-Saclay. Her work is related to future control mechanisms for IoT networks. Natalya received her Engineer degree in Telecommunication Network and Switching Systems from Siberian State University of Telecommunications and Information sciences, Novosibirsk, Russia, in 2010. In 2011, she completed her M.S. degree in Networking and then her Ph.D. degree in Computer Science in 2015 from University Pierre & Marie Curie (UPMC). She held a postdoctoral position at Cisco Systems where she proposed novel strategies for in-network loss detection and recovery in wireless mobile Information-Centric Networking (ICN). Natalya joined Nokia Bell Labs in 2016. Her research interests are related to the Future Internet Architectures and protocols, Internet of Things, wireless and mobile technologies, performance evaluation and traffic control.

Email natalya.rozhnova@nokia.com Social LinkedIn
Nokia sites use cookies to improve and personalize your experience and to display advertisements. The sites may also include cookies from third parties. By using this site, you consent to the use of cookies. Learn more