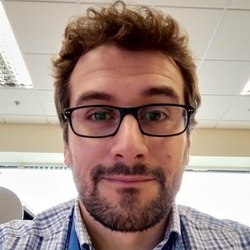 Lorenzo Galati Giordano (M’15, SM’20) is Member of Technical Staff at Nokia Bell Labs Ireland since 2015. Lorenzo received the M.Sc. and the Ph.D. degrees in wireless communication from Politecnico di Milano, Italy, in 2005 and 2010, respectively, and the master's degree in Innovation Management from IlSole24Ore Business School, Italy, in 2014. He was also Marie-Curie Short Term Fellow at University of Bedfordshire (UK) in 2008, researcher associate with the Italian National Research Council in 2010 and R&D Engineer for Azcom Technology, an Italian SME, from 2010 to 2014.  Lorenzo has more than 10 years of academical and industrial research experience on wireless communication systems and protocols, holds commercial patents and publications in prestigious books, IEEE journals and conferences. Lorenzo’s current focus is on future indoor networks and next generation Wi-Fi technologies, an area where he is contributing with pioneering works on large antenna arrays solutions for the unlicensed spectrum.

- The paper "IEEE 802.11be Extremely High Throughput: The Next Generation of Wi-Fi Technology Beyond 802.11ax," has entered the most popular list of IEEE Communication Magazine, which includes the 50 most frequently accessed documents for this publication.

- Awarded as top 10 inventor in Nokia Bell Labs Dublin (Ireland) for patent filings in 2018, developing a portfolio of fundamental patents to propose coordinated beamforming and null steering techniques into IEEE 802.11be standard.

- Most Attended Industry Program Award at IEEE Globecom 2017, Singapore, with the Industrial tutorial on "Drone Base Stations: Opportunities and Challenges Towards a Truly “Wireless” Wireless Network". (https://globecom2017.ieee-globecom.org/content/industry-program)

The Essential Guide to Realizing 5G-Connected UAVs with Massive MIMO

IEEE 802.11 Extremely High Throughput: The Next Generation of Wi-Fi Technology Beyond 802.11ax

On the Downlink Performance of UAV Communications in Dense Cellular Networks

Enhancing Coexistence in the Unlicensed Band with Massive MIMO

Email lorenzo.galati_giordano@nokia-bell-labs.com Phone +353 86 7806448 Social LinkedIn
Nokia sites use cookies to improve and personalize your experience and to display advertisements. The sites may also include cookies from third parties. By using this site, you consent to the use of cookies. Learn more