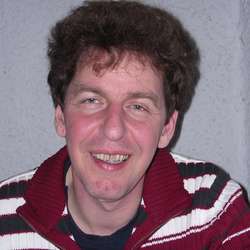 Diploma  degree in computer science  from the University of Stuttgart 1992 (Dipl.-Inform)

Jürgen Sienel, born 1965 in Esslingen/Neckar, Germany, finished his studies of Computer Science at the University of Stuttgart in 1992 with a Diplom-Informatiker degree and is working since then in Alcatel Research & Innovation, now Bell Labs.

After working several years on digital signal processing, speech recognition and multi-modal systems including contributing to W3C standardisation, he joined in 2005 the Intelligent IP Infrastructure (I3) project on new NGN communication infrastructure elements and services, like the enhancement of IMS/TISPAN related architectures for service execution support, peer-to-peer systems and was responsible for voice over IP peering solutions. In 2007 the group became part of the Bell-Labs Service Infrastructure research domain.

After working on service architectures for user-generated services using light-weight service components, he joined the multimedia domain were he worked on a distributed system approach for multimedia processing (MediaCloud).

He has successfully led Alcatel-Lucent’s participation in the IST FP6 project OPUCE, developing a platform for managing user generated services. Before he contributed to other funded research activities like SMADA and MAP, has been invited to be a member of the industrial advisory board of the EU project COMIC. He was acting as technical expert and project reviewer in the FP7 research program on invitation of the European Commission.

He has authored and co-authored more than 15 conference papers, articles and similar publication  and has filed more than 40 patents. He was contributing to the ETSI subgroup Aurora on Distributed Speech Recognition, where Alcatel succeeded to standardize a noise-robust front-end, which has been adopted by 3GPP in 2003. Between 2003 and 2005 he was representing Alcatel in the World-Wide Web Consortium (W3C) working group on multimodal interaction (MMI), where he contributed to the Delivery Context Interfaces (DCI), which is a W3C candidate recommendation since 2007. He is member of the German association of computer science (Gesellschaft für Informatik).

Email juergen.sienel@nokia-bell-labs.com Phone +49-711-821-32293 Social LinkedIn
Nokia sites use cookies to improve and personalize your experience and to display advertisements. The sites may also include cookies from third parties. By using this site, you consent to the use of cookies. Learn more