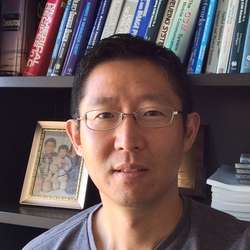 JOSEPH H. KANG is a researcher at Bell Labs in Murray Hill, New Jersey where he has been working on the design and analysis of advanced algorithms and protocols for cellular and ad hoc communication networks. He received B.S. and M.Eng. degrees in electrical engineering from the Massachusetts Institute of Technology and a Ph.D. degree in electrical engineering from the University of Michigan, Ann Arbor where he held university fellowship and research assistant positions. He is a senior member of the IEEE with over fifty issued and pending patents, over thirty papers in refereed publications, and numerous contributions to 3GPP and 3GPP2 wireless standards. He has received a number of awards including the Bell Labs Presidents Award and two Bell Labs Teamwork Awards. His current research interests are in the fields of cooperative communications, heterogeneous networks, interference cancellation, channel estimation techniques, and dynamic spectrum access protocols.

Email joseph.kang@nokia-bell-labs.com Phone +1 908-582-2614
Nokia sites use cookies to improve and personalize your experience and to display advertisements. The sites may also include cookies from third parties. By using this site, you consent to the use of cookies. Learn more