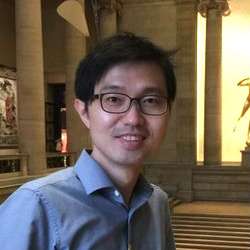 Jong-Hoon Ahn received the B.S. and Ph.D. degrees in physics from Pohang University of Science and Technology (POSTECH), Korea, in 2000 and 2007, respectively. From 2007 to 2008, he was a postdoctoral research fellow in Yonsei University. From 2010 to 2012, he was a research professor in Hanyang University. From 2013 to 2014, he worked as a member of technical staff at Alcatel-Lucent Bell Labs in Seoul and now he is working at Nokia Bell Labs in Murray Hill. He is interested in data and computational science for multidisciplinary research work and is currently solving fundamental problems in machine learning and computer vision.

Phone +1 (908) 582 1272
Nokia sites use cookies to improve and personalize your experience and to display advertisements. The sites may also include cookies from third parties. By using this site, you consent to the use of cookies. Learn more