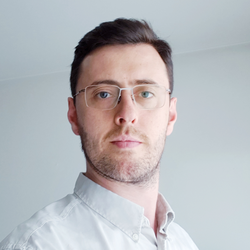 He is leading research activities aiming at pioneering high speed analog and digital interfaces for performance-critical optoelectronic and RF systems, covering modeling, design, fabrication, packaging and characterization of high performance semiconductor devices, integrated circuits and modules, at microwave and millimeter wave frequencies.
Jean-Yves is the author or co-author of more than 80 scientific peer-reviewed publications and 3 patents. He is a Reviewer for IEEE MTT-T, JSSC and JSTQE publications.

From 2005 to 2008, he has developped a portfolio of state-of-the art transimpedance amplifiers integrated in a photoreceivers product line for 40G optical communication systems. From 2008 to 2011, he extended this portfolio and contributed to pioneering transmitters and receivers for 100G coherent communication systems. He has designed distributed amplifiers holding the swing-speed product world record since 2012. Since 2013, he has been leading a very high speed optoelectronic functional packaging effort aiming at pioneering beyond-100G optical communication systems. Since 2016, he has been extending this research scope to high speed analog-and-digital interfaces.

Selected and invited to the 2013 EU-US Frontiers of Engineering Symposium.

Email jean-yves.dupuy@3-5lab.fr Phone +33 (0)1 7323 0839 Social Twitter LinkedIn
Nokia sites use cookies to improve and personalize your experience and to display advertisements. The sites may also include cookies from third parties. By using this site, you consent to the use of cookies. Learn more