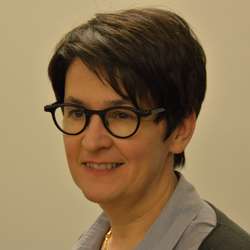 Ingrid Van de Voorde received a MSc degree in electrical engineering from the Free University of Brussels (Belgium) in 1990. That same year, she joined the Alcatel Corporate Research Center in Antwerp (Belgium). Starting research on ATM-based Passive Optical Networks, she moved to more advanced PON systems and lead the first European funded project on SuperPONs. In 2000, she moved to the Network Strategy group of Alcatel where she elaborated with her team the introduction of Ethernet in Access. In 2003, she moved back to the Research & Innovation center to lead the research activities related to fixed access. With the international team she pushed several innovations towards the business group, the major ones being Ethernet based DSL access node, DSL network Analyzer, and GPON. In 2008, she joined Bell Labs in the new merged company Alcatel-Lucent, to lead the BL Research Domain Fixed Access & Multimedia, which comprises next to fixed access, home networking and multi-media technology. Major achievements of the team were a new packet processor for the high speed VDSL line card in the ISAM product, the world-record DSL phantom mode, 10Gbps XGPON1, Home service manager with Home QoS & diagnostics, and in the area of video, Fast Channel Change/Retransmissions, video algo’s for Immersive Communications, Low latency HAS video delivery over fixed and wireless networks and advanced video analytics for trend detection. Since 2014, she took up the role of Head of Bell Labs Belgium, fostering internal and external collaborations. Ingrid also represents ALU at the board of the 5G Infrastructure Association, where she takes the role of treasurer.

Email ingrid.van_de_voorde@nokia-bell-labs.com Phone +32 240 9161 Social LinkedIn
Nokia sites use cookies to improve and personalize your experience and to display advertisements. The sites may also include cookies from third parties. By using this site, you consent to the use of cookies. Learn more