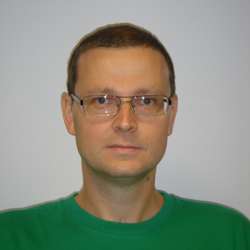 Ilija Hadzic grew up in a place that is now known as Serbia, a small country located in the Balkans region of Europe, known mostly for basketball and tennis players and less for other more important things. He spent half of his youth on dry land hacking various computers, most of which can now only be found in museums or junk yards. The other half, he spent on water, rowing in various crews and competing against other crews.

Ilija spent the last decade of the previous century in a quest for pieces of paper that would make his knowledge about computer software and hardware official. The highest one he got his hands on was a PhD degree in Electrical Engineering from the University of Pennsylvania, about a year before the turn of the century. Armed with the knowledge, optimism, and degrees, Ilija successfully convinced a few guys in Murray Hill, New Jersey that they should pay him for what he would do anyway as his hobby. So he was issued a badge with a red logo that looked like a coffee stain and put in a nice office (with a window) at the end of the hallway.

Ilija would spend the next decade coming up with all kinds of cool hardware and software that would eventually be put in some dark rooms and wired up into a network that everyone takes for granted, but very few appreciate how difficult it is to make it work. Along the way, he wrote a bunch of papers and patents about the stuff he was doing and above all had a lot of fun. Although Ilija has remained in the same office though the present day, the name of the corporation that rented his brain, body and soul got longer and the logo on his badge changed into something that looked like a purple Mobius strip.

One morning Ilija woke up thinking that it may be cool to try out something other than coming up with a next great method to send "Mr. Watson come here, I need you." from one end of the wire to the other. Those who wrote his paychecks didn't mind, so Ilija started experimenting with graphics, video, virtual machines, and web applications. He is currently having fun building large and complex software systems and doing cool things with them.

Besides firing his synapses at insane rate, Ilija also keeps his muscles from rusting by running from one end of a grass field to the other while kicking a spherical object filled up with pressurized air. When it's too cold for that, he opts for sliding down a snow-covered hill while standing on two pieces of polished plywood. Ilija shares his home in New Jersey with the nicest and the most beautiful person in the world, who is about his age and does not mind coping with his geekyness, along with two younger persons who carry half of his DNA code.

Email ilija.hadzic@nokia-bell-labs.com Social LinkedIn
Nokia sites use cookies to improve and personalize your experience and to display advertisements. The sites may also include cookies from third parties. By using this site, you consent to the use of cookies. Learn more