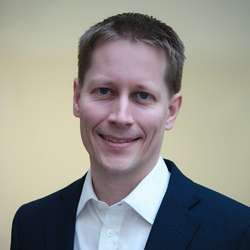 Dipl.Ing.(FH) and M.Eng. degree, October 1995 - July 2000
The University of Applied Sciences Kempten, Germany, and The University
of Ulster, United Kingdom.

Dr. Holger Claussen is leader of the Small Cells Research at Bell Labs with a team in Ireland and the US. In this role, he and his team are innovating in all areas related to future evolution, deployment, and operation of small cell networks to address the exponential growth in mobile data traffic. His research in this domain has been commercialized in Alcatel-Lucent’s (now Nokia's) Small Cell product portfolio and continues to have significant impact. He received the 2014 World Technology Award in the individual category Communications Technology for innovative work of "the greatest likely long-term significance".

Prior to this, Holger was head of the Autonomous Networks and Systems Research Department at Bell Labs Ireland, where he directed research in the area of self-managing networks to enable the first large scale femtocell deployments from 2009 onwards. During this time, he also built a cloud computing research team, focusing on predicable performance and reducing latency to enable running telecommunication applications on a cloud infrastructure.

Holger received his Ph.D. degree in signal processing for digital communications from the University of Edinburgh, United Kingdom in 2004. He is author of more than 90 publications 45 granted patent families and further 70 filed patent applications. He is fellow of the World Technology Network, senior member of the IEEE, and member of the IET.

Email holger.claussen@nokia-bell-labs.com Social LinkedIn
Nokia sites use cookies to improve and personalize your experience and to display advertisements. The sites may also include cookies from third parties. By using this site, you consent to the use of cookies. Learn more