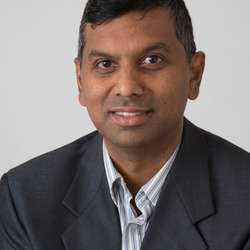 PhD in Electrical Engineering from Cornell University, Ithaca, NY in 1997

Master of Science in Electrical Engineering from Cornell University, Ithaca, NY in 1995

Harish Viswanathan is Head of the Radio Systems Research Group. He leads an international team of researchers investigating  various aspects of wireless communication systems, and in particular, 5G. In his prior role, as a CTO Partner he was responsible for advising the Corporate CTO on Technology Strategy through in-depth analysis of emerging technology and market needs. Harish Viswanathan joined Bell Labs in 1997 and has worked on multiple antenna technology for cellular wireless networks, mobile network architecture, and M2M. He received the B. Tech. degree from the Department of Electrical Engineering, Indian Institute of Technology, Chennai, India and the M.S. and Ph.D. degrees from the School of Electrical Engineering, Cornell University, Ithaca, NY. He holds more than 50 patents and has published more than 100 papers. He is a Fellow of the IEEE and a Bell Labs Fellow.

H. Viswanathan, "Capacity of Markov channels with CSI and delayed feedback," in the IEEE Transactions on Information Theory, March 1999

H. Viswanathan and S. Venkatesan, “Asymptotics of sum rate for dirty paper coding and beamforming in multiple-antenna broadcast channels,”  in the proceedings of the 41st  Annual Allerton Conference on Communications and Control, Oct 2003.

H. Viswanathan and K. Kumaran, “Rate scheduling for multi-antenna downlink systems,” in the proceedings of the 39th Annual Allerton Conference on Communications and Control, Oct 2001.  Also, in IEEE Transactions on Communications, April 2005.

H. Viswanathan and S. Venkatesan, “The impact of antenna diversity in multiple antenna systems with scheduling,” in the IEEE Transactions on Communications, April 2004.

Ho, T. and Viswanathan H., “Dynamic algorithms for multicast with intra-session network coding,” in proceedings of the 43rd Annual Allerton Conference on Communication and Control, October 2005..

Email harish.viswanathan@nokia-bell-labs.com Social LinkedIn
Nokia sites use cookies to improve and personalize your experience and to display advertisements. The sites may also include cookies from third parties. By using this site, you consent to the use of cookies. Learn more