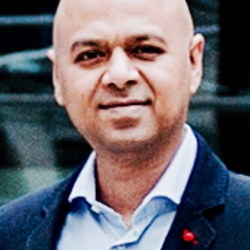 Dr Fahim Kawsar is the Founding Director of Pervasive Systems research at Nokia Bell Labs, Cambridge, UK and holds a Design United Professorship at TU Delft, Netherlands. An experimental computer scientist at heart, he spends most of his time at Cambridge building sensory AI systems with novel computational forms to explain human behaviour with other people, places, and things. He is intrigued by the power of design and frequently visits TU Delft to teach and debate the influence of sensory data systems in redefining design, and vice versa. Fahim is a frequent keynote speaker, (co-)authored 150+ publications, filed 30+ patents, is Associated Editor in Chief of IEEE Pervasive Computing, sits at the editorial board of ACM IMWUT,  serves (or served) as organising and program committee member of leading mobile, wearable, and pervasive systems conferences and had multiple million-scale projects commissioned. His work and publications can be viewed at  http://www.fahim-kawsar.net.

The city as a personal assistant

On Tracking the Physicality of Wi-Fi: A Subspace Approach

On Robustness of Cloud Speech APIs: An Early Characterization

Mindful Interruptions: A Lightweight System for Managing Interruptibility on Wearables

An Early Characterisation of Wearing Variability onMotion Signals for Wearables