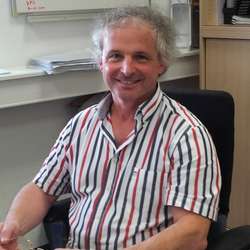 Eugen is working in the high-speed systems, switching and processing group within the IP transport program.

Eugen received his Ph.D. degree in 1991 from the University of Stuttgart, Germany. In 1992 he joined the Alcatel Corporate Research Centre in Stuttgart, where he was engaged in modeling, design and characterization of high-speed opto-electronic devices.
From 1996 he worked in system department of Alcatel Research & Innovation on high-speed OTDM and ETDM based transmission systems and later in Alcatel-Lucent Bell Labs on 100G systems.
Eugen´s current research activities are focussed on large-scale high-speed switching and high-capacity optical transport.

Member of the Alcatel-Lucent Technical Academy

Email eugen.lach@nokia-bell-labs.com
Nokia sites use cookies to improve and personalize your experience and to display advertisements. The sites may also include cookies from third parties. By using this site, you consent to the use of cookies. Learn more