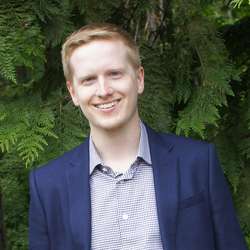 Michael S. Eggleston received his B.S. degree in Electrical Engineering and Physics from Iowa State University in 2009. In 2015, he received his Ph.D. degree in Electrical Engineering at the University of California, Berkeley. His dissertation explored the use of optical antennas to enhance the rate of spontaneous emission in nanoLEDs to create an ultra high-speed, efficient, nano-optical emitter. His research interests include the design and testing of integrated Silicon Photonics and nanophontonics for high-speed energy-efficient light emitters and optical links. He is currently researching new methods to optically sense what is inside the body and in its immediate surroundings using such techniques as optical coherence tomography (OCT), spectroscopy, Raman scattering, and LIDAR.

§ David J. Sakrison Memorial Prize: awarded annually to a UC Berkeley EECS Department graduate student who has completed what is deemed by a faculty committee to be a truly outstanding piece of research. (May 2015)

§ Ross N. Tucker Memorial Award: awarded to recognize superior work and scholarship in the characterization, development and/or use of semiconductor, magnetic, optical or electronic materials by a graduate student or students pursuing such areas of inquiry at the University of California, Berkeley. (May 2014)

Email michael.eggleston@nokia-bell-labs.com Phone 908-679-5577
Nokia sites use cookies to improve and personalize your experience and to display advertisements. The sites may also include cookies from third parties. By using this site, you consent to the use of cookies. Learn more