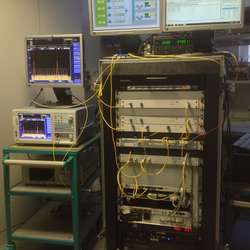 M.Sc. and Ph.D. degrees in Electrical Engineering from the University of Twente, Enschede, The Netherlands

Doutje joined Bell Labs in 2000.  She has been a Lead Engineer in a team that has developed a number of early system demonstrations and has done research for several generations of PON.

Dr. van Veen’s research has focused on many aspects of the physical layer in optical access which resulted into several published papers and patents.

She is serving as a member of the Technical Program Committee ‘Access, Local Area and Home Networks’ for ECOC 2014.

Email dora.van_veen@nokia-bell-labs.com
Nokia sites use cookies to improve and personalize your experience and to display advertisements. The sites may also include cookies from third parties. By using this site, you consent to the use of cookies. Learn more