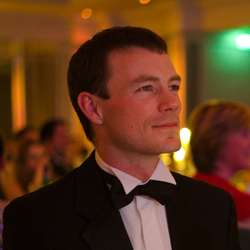 Domhnaill Hernon is Head of Experiments in Arts and Technology (E.A.T.) at Nokia Bell Labs. He graduated with a B.Eng in Aeronautical Engineering, a Ph.D in fundamental fluid mechanics from the University of Limerick and an Executive M.B.A. from Dublin City University, Ireland. He is passionate about turning research/ideas into reality and exploring the bounds of creativity to push the limits of technology. Domhnaill was previously responsible for turning Bell Labs disruptive research assets into proto-solutions that could be tested at scale in the market, and he established new methods to overcome the “Innovation Valley of Death”. He is currently responsible for Bell Labs global activities in E.A.T. where he collaborates with the artistic and creative community to push the limits of technology to solve the greatest human need challenges.

Young Leader of the year award at the Irish Lab Awards, Dec 2013

Why engineers and scientists must E.A.T.