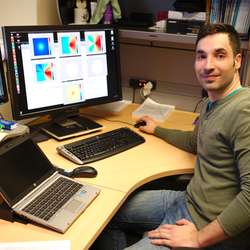 Prior to this, David received the B.Sc. and MSc. degrees in Telecommunication from Miguel Hernandez University, Spain, in 2003 and 2006, respectively, and the PhD. degree in Wireless Networking from the University of Bedfordshire, U.K., in 2011. David was also a RF Engineer with Vodafone, Spain, from 2005 to 2006, and a Research Associate with King’s College London, U.K., from 2010 to 2011.

During his professional career, David has performed extensive work on small cells and ultra-dense networks --paying special attention to their performance analysis, as well as inter-cell interference coordination and mobility management aspects--, has pioneered work on LTE and WLAN inter-working --forming part of the team that invented Wi-Fi Boost, and lead to 3GPP LWIP--, and is currently working on Future Indoor Networks (digital home, future enterprise and industry 4.0), and IEEE 802.11be, the next generation of Wi-Fi technology beyond 802.11ax.

As for his publication record, David has authored the book Small Cell Networks: Deployment, Management and Optimization (IEEE Press/Wiley, 2018), has published 135 book chapters, journal and conference papers, all in recognized venues, and holds 17 granted patents and over 49 filed ones.

In recognition to his work, David received a PhD. Marie-Curie Fellowship in 2007, the IEEE ComSoc Best Young Professional Industry Award in 2016, the IEEE WCNC'18 Best Student Paper Award in 2018, and the Bell Labs DMTS Award in 2019. David was also a finalist for the Scientist of the Year prize in The Irish Laboratory Awards in 2013 and 2015.

Email david.lopez-perez@nokia-bell-labs.com Website www.dlopez.org/
Nokia sites use cookies to improve and personalize your experience and to display advertisements. The sites may also include cookies from third parties. By using this site, you consent to the use of cookies. Learn more