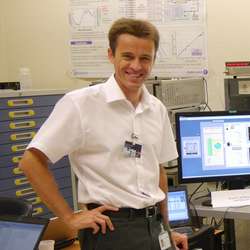 Arnaud Dupas joined Alcatel-Lucent Corporate Research Center in 1999 in Marcoussis, France. Before he worked as PhD student in Orange Labs (former France Telecom CNET) in Lannion, France, from 1996 to 1999. He was involved in European project KEOPS on the introduction of optical wavelength conversion and optical 3R regeneration based on Semiconductor Optical Amplifier. After joining Alcatel-Lucent, his main research interests were on burst mode optoelectronic receiver and optical switching functions for Metro and Core networks. He participated to IST/DAVID, NOBEL2 and DBORN project, and was involved in the definition and prototyping of the central scheduler of electronic byte switch in 1850TSS product from the optics division. He was responsible for the FPGA design of the transmitter in Access GreenTouch project BIPON where a factor of x30 has been achieved in energy efficiency improvement. He is now studying the new concept of Elastic Optical Network, and is focused on the extensions of Software Defined Network (SDN) to the optical high speed elements like coherent transceivers from 100Gb/s to 1Tb/s per channel.
He has authored or co-authors more than 40 scientific papers in journals and international conferences and holds 10 patents.

Demonstration of a SDN-based Spectrum Monitoring of Elastic Optical Networks

Will Metro Networks Be the Playground for (True) Elastic Optical Networks?

Email arnaud.dupas@nokia-bell-labs.com Website www.researchgate.net/profil... Social LinkedIn
Nokia sites use cookies to improve and personalize your experience and to display advertisements. The sites may also include cookies from third parties. By using this site, you consent to the use of cookies. Learn more