HOLMDEL, N.J. (June 3, 1998) -- A lot of detective work by Tony Tyson and Robert Wilson will lead to a June 8 ceremony at Bell Labs Holmdel facility to honor Karl Jansky, the first person to hear radio waves from outer space.

Jansky's discovery in 1931, which was not publicly discussed until a 1933 page-one article in the New York Times, spawned the field of radio astronomy. 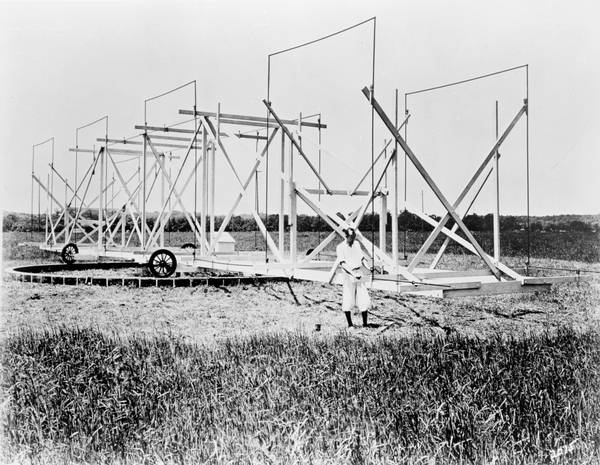 When Jansky died in 1950 at the young age of 44, however, the Bell Labs scientist had received no formal recognition from the scientific community.

"The discovery was ahead of its time because in 1933, radio waves had nothing to do with astronomy, so it really fell between radio engineering and astronomy," said Tyson, a Bell Labs astrophysicist and one of the two sleuths in this tale. He also is a member of the National Academy of Sciences.

Tyson helped pinpoint the former location of Jansky's original 100-foot-long antenna, which resembled a box kite lying on its side, supported by Ford Model T tires. The location was a crucial finding because monuments -- in this case, a 13-foot-long stylized replica -- fittingly reside on historical sites.

"It didn't seem right to just go out there and pick a spot," said Wilson, a Nobel Prize winner and former Bell Labs astronomer. "Because Jansky's antenna was the start of our science, we wanted to mark it appropriately."

Jansky's discovery actually was an offshoot of his work to find sources of static in overseas radio signals. While two clear culprits were local and distant thunderstorms, a third was a steady hiss of unknown origin that appeared daily at the same time and same location. By using a star map, Jansky discovered that the waves came from the center of the Milky Way.

"There is a clear message here," Tyson said. "Serendipity happens to those people who are both prepared and open minded."

Even though Jansky performed some follow-up studies on the extraterrestrial radio waves for several years -- mostly in his spare time -- he largely abandoned those efforts to pursue wartime research. Years later, other scientists continued developing the field of radio astronomy, which has led to such discoveries as quasars, pulsars, black holes and the expanding universe. In fact, about a mile from the site of Jansky's monument, at Bell Labs Crawford Hill facility, Wilson and fellow Bell Labs scientist Arno Penzias discovered radio waves that actually were remnants of the Big Bang. Their 1964 discovery led to the Nobel Prize in Physics 14 years later.

About 10 years ago, Wilson and Tyson were talking about Jansky and decided they wanted to honor his contributions to astronomy, which were not fully understood until shortly after his death. Until that initial conversation, there had been relatively little recognition for Jansky, except when astronomers labeled the radio-wave measurement unit the "jansky."

Sometime during the 1960s, the state of New Jersey erected a road sign on a utility pole near the Bell Labs' Holmdel facility, which marks the site -- roughly one half mile from the original antenna -- as the birthplace of radio astronomy. Unfortunately, it's unsafe to stop along that section of the road. "You could hardly stop in your car and read the sign without getting hit from behind," said Wilson, now a senior scientist at the Harvard-Smithsonian Center for Astrophysics in Cambridge, Mass., and a Bell Labs consultant.

Also during the 60s, the National Radio Astronomy Observatory in Green Bank, W. Va., dedicated a replica of Jansky's antenna, which was built by the same carpenter at Bell Labs who had worked on the original.

Wilson and Tyson began searching for Bell Labs records about Jansky, but they soon discovered Jansky's lab notebooks from 1928 to 1937 were missing. Those notebooks, they realized, would provide one of the crucial clues that would pinpoint the antenna's original location. The antenna itself vanished sometime during the 1950s.

A few years ago, a summer student majoring in archeology found an old box of papers at Bell Labs' former West Street facility in New York City. At one time, the papers had been slated for a corporate museum, but they remained in the possession of a company executive who had corresponded with one of Jansky's colleagues.

One page in the notebook, Tyson discovered, provided the location of Jansky's office and also the antenna's angular position. Then, he and Wilson analyzed the other pieces of the puzzle: a survey of the former Holmdel building; an old map of Holmdel Township, which showed the building's location by a stream; and an old aerial photograph that faintly showed the antenna itself, the stream and a tree line that partially exists today. Eventually, with lots of geometric analysis, the two astronomers determined that the original antenna was 1,000 feet from the old building, placing it on a grassy patch near the current Holmdel building's main parking lot.

"I was just relieved that the actual location was on grass and not asphalt," quipped Tyson, who along with Wilson have devoted a few hours weekly to the Jansky memorial during the last several years.

For the June 8 ceremony, which begins at 11 a.m., Tyson and Wilson are expecting many members of Jansky's family, including his sister, son and daughter, and also some of his former colleagues and friends. For instance, Jansky's former table tennis partner and Bell Labs engineer George Eberhardt will attend. And Grote Reber, who confirmed Jansky's results in 1937 and later mapped the Milky Way galaxy in 1941, will be traveling from Tasmania to attend. Also attending will be Jesse Greenstein, who was one of the first scientists to attempt a theoretical explanation of Jansky's observations.