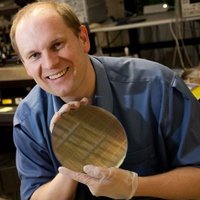 Yves Baeyens received the Ph.D. degree in Electrical Engineering from the KU Leuven, Belgium in 1997. After his Ph.D., he spent one and a half year as a visiting scientist at the Fraunhofer Institute for Applied Solid-State Physics in Freiburg, Germany.

Since 1998, he has been with Bell Laboratories, currently the research division of Alcatel-Lucent. He is now the Director of the High-Speed Electronics and Opto-Electronics Research Department in Murray Hill, NJ. His main research interests are the architecture, design and technology of electronic and opto-electronic circuits for terabit optical and multi-gigabit wireless applications.

Yves Baeyens is a Fellow of the IEEE and was nominated and selected for the National Academy of Engineering 2009 US and 2011 US/EU Frontiers in Engineering Symposia. He authored or co-authored over 100 publications on high-speed semiconductor technologies and circuits.

Since 2003, Yves Baeyens is an adjunct professor at the Department of Electrical Engineering of Columbia University, New York City, NY, where he teaches a graduate course on advanced microwave circuit design.