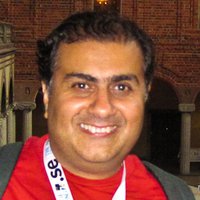 He holds a B.Sc. in Computer Science with a minor in Mathematics, a M.Sc. in Computer Science, both from Bradley University; and a Ph.D. in Computer Science from Illinois Institute of Technology. Vijay's current work is focused on scalable analytic architectures and algorithms for autonomic 5G networks: the volume and velocity of data produced in 5G will be far surpassed by data generated in today's communications networks and the ways to collect, cleanse, summarize and aggregate that data so it can be consumed by predictive models in real-time is a challenge. In the past, Vijay's work explored multimedia signaling protocols (Session Initiation Protocol, or SIP) and the security and privacy aspects of multimedia protocols. His earlier work proposed the use of SIP as a canonical protocol for executing services both in the Public Switched Telephone Network (PSTN) and the Internet. The results of these efforts was siptrans, a general-purpose SIP transaction layer library used to create SIP user agents, proxies, and registrars. The siptrans library was subsequently used as the basis for the Lucent Common SIP Stack (CSS), which is currently used in service provider networks of national and international companies. Another outcome of the work on CSS was the formalization of Corporate Open Source (COS), which is defined as use of open source techniques to develop commercial software. Today, COS plays a foundational role in the emerging domain of Inner Source, where it informs the taxonomy and helps define some of the roles in Inner Source.

Vijay's research interests are large scale (big data) analytics, scalable architectures for large-scale analytics, multimedia protocols, security and privacy in multimedia protocols, distributed programming, open/inner source and peer-to-peer networks. He is a senior member of the ACM, a member of the IEEE Computer Society and Usenix. He is currently the co-chair of the Application Layer Traffic Optimization (ALTO) Working Group in the IETF, which is chartered with designing a extensible protocol to enable efficient communications between peers in a peer-to-peer system.

Vijay has also worked at Fermi National Accelerator Laboratory, where he was responsible for providing distributed programming tools and frameworks for data analysis over a high-availability computing infrastructure to a geographically disperesed team of astrophysicists (the Sloan Digital Sky Survey). After Fermilab, Vijay worked at Tellabs Operations Inc., where his primary responsibility was to introduce a TCP/IP protocol stack on a digital cross-connect telecommunications switch. This enabled the switch to be accessible over the Internet for provisioning services and extracting critical data using HTTP, a new and evolving protocol at that time. After Tellabs, he worked at Net Guru Technologies, a Chicago-area Internet startup that was successfully acquired by a larger competitor. Before Fermilab, Vijay worked as a consultant at Cap Gemini America, the North American branch of the French Cap Gemini Sogeti group of companies (now known as Cap Gemini Ernst & Young).