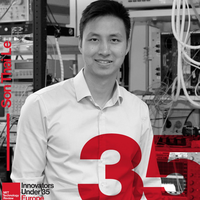 Son Thai Le is an Optical Transmission Systems Researcher at Nokia Bell Labs, Holmdel, NJ, USA. He received his joint bachelor and Master of Engineering (M.E.) degree with highest distinction from Southern Federal University in Russia in 2011 and 2012, respectively. He obtained his PhD in January 2016 from Aston University, UK. After that, he joined Digital Signal Processing department at Nokia Bell Labs in Stuttgart Germany. From May 2019, Son Thai Le has been with Nokia Bell Labs in Holmdel, NJ, USA.

Since joining Bell Labs in 2016, Son Thai Le has focused on various aspects of optical communications, including nonlinearity mitigation with novel coding and multiplexing approaches such as Nonlinear Frequency Division Multiplexing (NFDM), high-speed short-reach transmissions and 5G mobile front-haul. He is the record holder in almost every aspects of NFDM transmissions, including the highest data rate, highest spectral efficiency, longest reach, ect. He also demonstrated a record data rate of 510 Gb/s over 80 km for direct detected optical transmission systems using a single-ended photodiode. He has also demonstrated the highest data rate in all 5G IF-over-fiber systems reported so far.