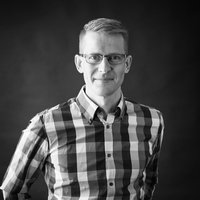 I hold a joint PhD in mathematics and computer science from McGill University in Montreal, Canada. In 2011, I joined Bell Labs as a post-doctoral researcher before becoming a Member of Technical Staff in the Mathematics of Network Systems Department.  I currently head Nokia Bell Labs' Artificial Intelligence Research Lab and am focused on creating solutions for critically hard and important industry problems through disruptive research into algorithms, machine learning fundamentals and applications, and real-time analytics. I apply my unique depth in both mathematics and computing technologies to envision the evolution and future effects of artificial intelligence ultimately building disruptive technologies to realize this vision. My current research focuses on moving beyond existing machine learning systems towards systems that mimic the human capacity for analytical thinking.  When not imagining the future, I can usually be found skiing or cycling.

I received a Ph.D. from the Department of Mathematics and Statistics and the School of Computer Science at McGill University, Montreal, Quebec in 2011. My supervisors were Bruce Reed and Bruce Shepherd. My research was partially funded by an NSERC Canadian Graduate Scholarship.

I received a M.Sc. from the Department of Computing Science at the University of Alberta, Edmonton, Alberta in 2005. My supervisors were Ryan Hayward and Guohui Lin. My research was partially funded by an NSERC Canadian Graduate Scholarship.

I received a B.Sc. in Mathematics, specialization Computational Science, at the University of Alberta, Edmonton, Alberta in 2003. My summer research under Ryan Hayward was partially funded by an NSERC Undergraduate Student Research Award.