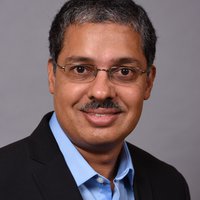 KRISHNA BALACHANDRAN is currently a Partner and Director at Bell Labs Consulting where he leads advanced R&D for future industrial automation with a focus on innovations driven by wireless networks and augmented cognition (achieved through untethered hyperscale sensing and machine learning techniques). He has been with Bell Labs since 1996, contributing to research and development for successive generations of wireless technologies. Prior to his current role, he was a Director and Distinguished Member of Technical Staff in the Mobile Radio Research Lab at Bell Labs. In this role, he led a team of researchers in identifying, defining and delivering high-impact research results that established Bell Labs/Nokia leadership in 5G and IoT, influenced product strategy/roadmaps, and contributed to driving standards proposals that provide substantial improvement in wireless capacity and Quality of Experience for enhanced mobile broadband and IoT.

Dr. Balachandran is a Senior Member of the IEEE and has published over 75 journal and conference papers garnering 2200+ citations. He also has 75+ awarded and pending patents and numerous contributions to global standardization bodies. He has been recognized with the Bell Labs President’s Gold Award, Bell Labs Teamwork Awards, the Nokia Top Inventor Award for granted patents, and the Nokia Top Inventor Award for essential patents.