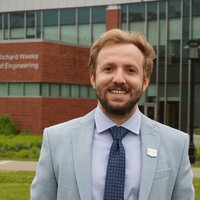 Aliasghar (Ali) Arab grew up in the city of Shiraz in the south part of Iran, known mostly for its poets, red wine, and sour-orange blossoms. As a teenager, he spent most of his time exercising extreme sports and skating. He was the country's champion and built a small skate park when he was 18. Later in the same year, Ali left home to study Robotics Engineering at the Shahrood University of Technology. Shahrood, a small town 1000 miles away from Shiraz, was the only place that offered a Robotic program at that time, where he spent 6 years building robots and going to robotic competitions until he graduated with MS in Electrical Engineering.

He moved to New Jersey in 2015 and worked on an autonomous racecar project through his Ph.D. at the Mechanical and Aerospace Engineering department of Rutgers University. Before he joins Bell Labs right after the pandemic was started in March 2020, he worked in Verizon for four years, where he learned about telecommunications, IoT, edge computing, and 5G. Today Ali lives in New York City, if he has some spare time from research in robotics and learning control theories, he will go skating or enjoy art at museums and galleries with his wife.

As a Robotic Researcher at Nokia Bell Labs, his current research is focused on next-generation motion planning and controller architectures, algorithms, and theories for safety-guaranteed predictive planning and control of autonomous robotic systems. He is curious to be involved in new exciting research projects, especially those related safety and sustainability of complex control systems. His doctorate thesis was focused on safety enhancements of future autonomous vehicles by using advanced maneuvers inspired by the stunt and professional race-car drivers.

He is an author of over 20 conference and journal publications both in Farsi and English. Also, he is an inventor on 2 US patents and more than 5 overseas patents, and 3 times champion of robotic competitions.