Allowing biologists to study subcellular activity in finer detail than ever before. 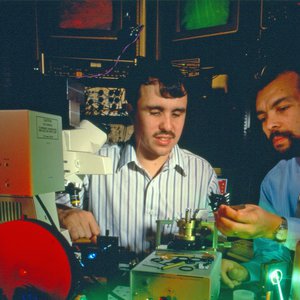 Eric Betzig was awarded the Nobel Prize in Chemistry, along with Stefan W. Hell and William E. Moerner, for the development of the Super-Resolved Fluorescence Microscopy technique, which reveals high-resolution 3D images of subcellular structure, allowing biologists to study the activity of molecules, cells and embryos in finer detail than ever before.

Betzig joined Bell Labs in Murray Hill in 1988 and worked to improve the Near-Field Scanning Optical Microscopy (NSOM) technology he had helped develop at Cornell during his PhD studies.  Betzig collaborated with Jay Trautman, Tim Harris and others to refine the NSOM technology and try out new applications. They achieved a resolution of 12 nanometers with their near-field probe, far better than the diffraction limit. The probe also yielded signals more than 10,000 times larger than those reported previously.

“I tried the technology everywhere I could think of. Sometimes it worked and sometimes it didn’t, but the papers came quick. In 1992, we applied it to data storage – at one time we held the world record for storage density – and in the following year I demonstrated super-resolution fluorescence imaging of cells for the first time.” — Eric Betzig

The exploration yielded key breakthroughs that brought Betzig closer to his dream of imaging molecules within living cells, with several breakthroughs along the way including:

Betzig and Hess continue to collaborate at the Janelia Research Campus of the Howard Hughes Medical Institute (HHMI). Betzig left Bell Labs in 1994 to work with his father in machine tool design, but after a decade returned to research and resumed collaboration with Hess, building on the groundbreaking work they had done together at Bell Labs. They built a super-resolution microscope that formed the basis for photo-activated localization microscopy (PALM) technology in 2006. The PALM technology allowed Betzig and Hess to optically image intracellular proteins at nanometer spatial resolution.