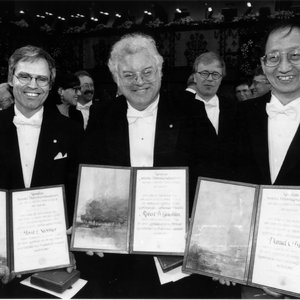 The 1998 Nobel Prize in Physics was shared by Bell Labs physicist Horst Störmer and two former Bell Labs researchers, Daniel Tsui and Robert Laughlin, “for their discovery of a new form of quantum fluid with fractionally charged excitations,” known to physicists as the fractional quantum Hall effect.

The historical roots of the fractional quantum Hall effect go back to the 19th century, before the laws of quantum mechanics—the laws that govern the microscopic behavior of matter—were known to physicists. In 1879, Edwin Hall, a graduate student at Johns Hopkins University, discovered that when a magnetic field was applied perpendicularly to a thin metal sheet that was conducting current, a small electrical voltage appeared across the current, from one side of the sheet to the other. The observed voltage is proportional to the strength of the applied field. This effect was named the Hall effect in honor of its discoverer. The Hall voltage and Hall resistance (the ratio of the Hall voltage to the current) are now commonly used in physics laboratories to measure the strengths of magnetic fields, as well as charge densities in various metals.

In 1980, the German physicist Klaus von Klitzing was investigating how quantum physics at low temperatures affects the Hall effect. He found that the observed Hall resistance did not vary smoothly when the magnetic field was varied smoothly at low temperatures in a thin semiconductor sheet. Instead, it changed in steps. The steps did not depend on the properties of the material but were given by a combination of fundamental physical constants divided by integers. This suggested that the laws of quantum mechanics were altering the Hall effect in ways previously unknown. The phenomenon is now called the integral quantum Hall effect For his discovery, von Klitzing received the 1985 Nobel Prize in Physics.

Two years after von Klitzing’s discovery, Störmer and Tsui were studying the quantum Hall effect, using extremely high-quality gallium arsenide-based samples that were made by Bell Labs scientist Arthur Gossard. Gossard had used the techniques of molecular beam epitaxy—invented at Bell Labs by Al Cho—to make a semiconductor layer so pure that the electrons in the sample could move long distances without bumping against impurities. In addition to using what Störmer called “the greatest sample in the world,” Störmer and Tsui had taken von Klitzing’s experiment a few steps further. Their experiment was at a lower temperature (near absolute zero) and they were using more powerful magnetic fields (close to a million times stronger than the Earth’s magnetic field).

To their great surprise, Störmer and Tsui found a new step in the Hall resistance, a step three times higher than the highest one that von Klitzing had found. Later, they found more steps that were above and between the steps that corresponded to integers. The heights of all the new steps could be expressed with the same combination of physical constants as von Klitzing’s steps, except that they now needed to be divided by fractions. It was as if electrons—considered to be indivisible—had mysteriously split into new “particles’’ that had fractional charges. This “anomalous” effect took the physics community by surprise and came to be known as the fractional quantum Hall effect.

A year after the discovery, Laughlin came up with an ingenious theoretical explanation. He said the combination of the low temperature and the powerful magnetic field forces the electrons to come together to form a new type of incompressible quantum liquid.

“It was at Bell Labs that I first made direct contact with real semiconductor experts and thus began to fully understand what amazing materials they were and what they could do.” — Robert Laughlin

The new quantum liquid has many remarkable properties. If an electron is added to the liquid, a number of fractionally charged quasi-particles are created. These unusual quasi-particles are a product of the electrons dancing around in the quantum liquid. Laughlin showed that the quasi-particles have exactly the correct amount of fractional charge to explain Störmer and Tsui’s observations. Störmer, Tsui, and Laughlin’s research led to a lot of subsequent work on the fractional quantum Hall effect, making it a very active field of physics. The Nobel committee said that the laureates’ work had “led to yet another breakthrough in our understanding of quantum physics and to the development of new theoretical concepts of significance in many branches of modern physics.”