In 1947, three Bell Labs scientists created a small semiconductor device. Today, there are trillions of transistors on Earth and billions in space. 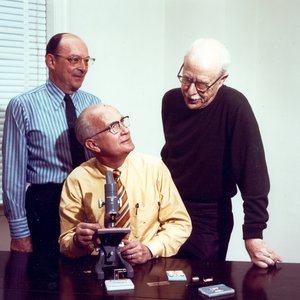 Bell Labs scientists John Bardeen, Walter Brattain, and William Shockley won the 1956 Nobel Prize in Physics for their invention of the transistor, a small semiconductor device that would change the world.

Today, there are transistors in every place where an electronic gadget can be found, including satellites and spacecraft. The transistor is the workhorse of electronic technology, the device that heralded the start of the digital age. Entire industries based on semiconductors were created in its wake. Indeed, telecommunications as we know it would not have been possible if it were not for the transistor.

The inventors of the transistor had been investigating the properties of semiconductors to see if they could come up with an acceptable substitute for the vacuum tubes and electromechanical relays used in telephone networks of the day. Electromechanical relays had made fully automatic telephone dialing and switching a reality but the relays had low speeds. Vacuum tubes were widely used as diodes and triodes in the electronics industry of the time. They, too, had made a lot of things possible in telephony, but they were not very dependable.

Under the guidance of Mervin Kelly, the director of Bell Labs research at the time, a group of physicists set about studying semiconductors to see whether they could create a durable alternative that might eventually replace the relay–tube combination in telephone networks. It would prove to be one of the most remarkable technical odysseys in the history of science and technology.

Semiconductors are usually artificial products made from elements such as germanium or silicon, although natural ones like lead sulfide have been known for a long time. Unlike conductors such as metals, which have numerous free electrons to carry an electric current, silicon and germanium have very few charge carriers. However, the addition of small amounts of certain contaminants—a process called doping— can change the number of charge carriers. For example, when a tiny bit of phosphorus is doped into silicon, a good semiconductor is obtained with the electrons donated by the phosphorus acting as charge carriers. Semiconductors obtained in this manner are called n-type semiconductors, since the charge of carriers is negative.

A more remarkable type of semiconductor is formed when a small amount of boron, for example, is doped on silicon. Boron provides a positively charged carrier by stealing an electron from silicon. In place of the electron, a hole is left behind, and this hole can move about within the semiconductor, acting as a carrier of positive charge. These semiconductors are called p-type semiconductors.

Bardeen, Brattain and Shockley had tested various combinations of p-type and n-type semiconductors under different conditions. They were hoping to find a configuration that would allow a thin layer of semiconductor to regulate a large flow of current between two electrodes.

On December 16, 1947, Bardeen, Brattain and Shockley managed to make the first working transistor, now known as the point-contact transistor. On Christmas Eve, in a demonstration where the physicists spoke into a microphone connected to a circuit with their transistor, the input signal was amplified about eighteen times. A new era in electronics had dawned, and the invention of the transistor became the basis for the electronic age.