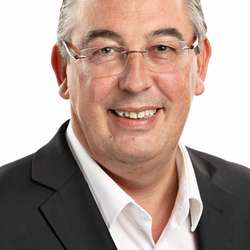 Jean-Luc holds a doctorate in physics on semi-conductor lasers and their application, awarded by The University of Pierre Marie Curie (UPMC, France).

Jean-Luc Beylat is also Chairman of the Business Cluster for Systematic Paris–Region, which has more than 700 members and investments of more than 2 billion Euros in research and development.

Jean-Luc first joined Alcatel in 1984 and worked on semiconductor lasers at Alcatel’s research centre in Marcoussis (France) for seven years. In 1992 he launched various activities concerning WDM transmission at Alcatel and also managed a research group working on optical amplification.  In 1996 he was named as Director of Systems Departments and Optical Networks at Alcatel’s research centre, where he was responsible for global research-based activities and terrestrial and submarine transmission. In 2000, he joined Alcatel Optic as Programme Director then as Vice President for network solutions. In this role, he was a key contributor to the development of the optic product portfolio in regards to an optimization of cost and data content. In November 2005, Jean-Luc joined Alcatel’s CTO team to develop the partnerships in R&D.

Jean-Luc holds a doctorate in physics on semi-conductor lasers and their application, awarded by The University of Pierre Marie Curie (UPMC, France). He is the author and co-author of more than fifty technological articles and has been in charge of fifteen patents. He has also acted as President several times for international conferences, such as ECOC in 2006 and in 2014. He is a board member at INRIA, at the Etablissement Public Paris-Saclay, at IRT SystemX and at ITEA. He is also a member of the executive committee of KIC ICT labs of the European Institute of Innovation and technology.

In February 2013, he was selected by the European Commission to take part in CONNECT Advisory Forum (CAF), in charge of determining innovation and research policies concerning information technologies. Finally, he co-created and directed the organization committee of the Prix Jean Jerphagnon. At the end of the 90s, he was one of the sponsors of the RNRT network. He was also a member of the Board of CAP DIGITAL cluster from 2009-2011.

With Pierre Tambourin, he is co-author of a report entitled “Innovation: a major issue for France”, which was commissioned by the government in April 2013.

With Pierre Tambourin he is co-author of a report entitled “Innovation: a major issue for France”, which was commissioned by the government in April 2013. http://www.redressement-productif.gouv.fr/files/rapport_beylat-tambourin.pdf

Email jean-luc.beylat@nokia.com Phone +33 1 6040 2600 Social Twitter LinkedIn
Nokia sites use cookies to improve and personalize your experience and to display advertisements. The sites may also include cookies from third parties. By using this site, you consent to the use of cookies. Learn more