The discovery of an otherworldly crackle, which became known as cosmic background radiation, proves the Big Bang theory of the universe. 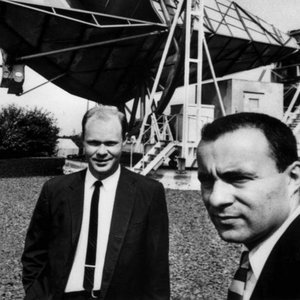 In the 1950s, there were two theories on the origin of the universe. The first was called the Steady State Theory. Put forward by Hermann Bondi, Thomas Gold and Fred Hoyle, it held that the universe was homogeneous in space and time and had always been that way—essentially, that the universe existed in “a steady state.”

The rival, more controversial, theory sought to incorporate the expansion of the universe into its framework. Edwin Hubble had shown in 1929 that galaxies are moving away from one another at remarkable speeds, implying that the space between galaxies is constantly expanding. A few physicists, led by George Gamow, had taken this notion and argued that the separation between galaxies must have been smaller in the past. If one stretched the idea to the limit, it meant that the universe had been infinitely dense at one point far back in time.

Using the laws of physics, Gamow and his colleagues were able to show that the densest point—which was also infinitely hot—corresponded to the moment of creation. Everything in the universe had emerged from this incredibly dense and hot state in a cataclysmic event astronomers call the Big Bang.

Penzias and Wilson resolved the conflict between the theories in 1964. They were working with a sensitive radio antenna at the Bell Labs Crawford Hill Laboratory outside Holmdel, New Jersey, when they discovered a persistent hiss with no obvious explanation. It came from all directions and, in spite of repeated checks for sources of noise, it refused to go away. Penzias and Wilson finally recognized that the mysterious radio signal was cosmic radiation that had survived from the earliest days of the universe. It was proof of the Big Bang.

“I had just finished my PhD. I had come to Bell Labs because I was attracted to this antenna — it had some very interesting properties.” — Arno Penzias

The Nobel committee wrote, “The discovery of Penzias and Wilson was a fundamental one: it has made it possible to obtain information about cosmic processes that took place a very long time ago, at the time of the creation of the universe.”

The cosmic microwave background hails from the earliest observable event in the history of the universe, some 300,000 years after its birth. Although the original temperature of the cosmic microwave background was much higher, the expansion of the universe has cooled it to its present value of 2.7 K, exactly the value predicted by Einstein’s general theory of relativity.

More than 50 years after Penzias and Wilson’s discovery, the significance of their finding remains as great as ever. This faint microwave noise, the remnant radiation from a time when the universe was vastly denser and hotter than now, continues to be a wellspring of cosmological discovery.