Proving the wave nature of matter through the experimental discovery of the diffraction of electrons by crystals. 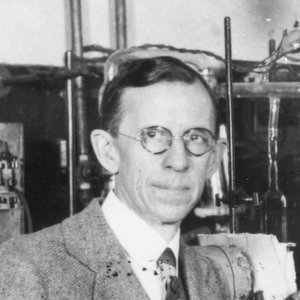 Clinton J Davisson shared the 1937 Nobel Prize in Physics with George Thomson, who had independently shown that the de Broglie hypothesis was correct. The Nobel Prize was the first awarded to a Bell Labs researcher.

The Royal Swedish Academy recognized their work by writing, “The investigation methods that you and Professor Thomson have elaborated and the further research work carried out by both of you have provided science with a new, exceedingly important instrument for examining the structure of matter, an instrument constituting a very valuable complement to the earlier method which makes use of X-ray radiation. The new investigations have already furnished manifold new, significant results within the fields of physics and chemistry and of the practical application of these sciences.”

In the early years of the 20th century, a conceptual revolution was taking place in physics and it would fundamentally change the way scientists looked at the world.

The seeds of this revolution were sown by German physicist Max Planck, who, while studying radiation from hot objects, had postulated that energy came in discrete packets called quanta. In 1905, the young Albert Einstein explained the photoelectric effect, a puzzling phenomenon in which metals eject electrons in response to incident light, using the idea of quantized light particles. Physicist Ernest Rutherford was investigating the structure of the nucleus simultaneously in England. Through Rutherford’s experiments, it became clear that atoms consisted of massive, positively charged nuclei surrounded by less massive, negatively charged electrons. In 1912, one of Rutherford’s students, Niels Bohr, incorporated quanta into a description of the physics of the atom. Bohr’s model of the hydrogen atom—where the electrons orbited the positively charged nucleus in discrete energy levels—proved to be very successful, and his ideas were extended to form the basis of quantum mechanics. One of the cornerstones of modern physics, quantum mechanics is considered to be among the most successful theories of science.

Bell Labs research scientist Clinton Davisson had been following the developments in quantum mechanics from the time he was a student. In 1923, Louis de Broglie, observing that light has some of the properties of ordinary particles, inverted the argument: If light can be a particle, why can’t a particle be a wave? He constructed a theory that extended the results to all particles. The de Broglie hypothesis implied that wave behavior was a universal property of matter. In 1925, Davisson and his Bell Labs colleague Lester Germer began a series of experiments that would, within two years, incontestably prove de Broglie’s hypothesis of the wave nature of matter.

“Davisson’s thoroughness was a most outstanding characteristic. He planned every experiment in the greatest detail before undertaking it. The precision of this planning is almost unbelievable.” — Mervin Kelly

Using a semicircular compass at the center of the tube, Davisson and Germer measured the angle at which the electrons were scattered by the nickel. Initially, the electrons behaved as particles, since the atoms in the nickel block were arranged randomly. However, after an accidental contamination, the physicists baked the nickel at a high temperature to get rid of impurities. This also forced the nickel atoms into a regular crystal lattice structure. Suddenly, the electrons began emerging in regular geometrical patterns that showed they had wavelike properties.

Detailed experiments showed the velocities at which the incoming electrons produced outgoing beams. Using the experimental setup, the Bell Labs physicists found the wavelengths. Since the wavelengths of the mechanical waves had been found, and since the velocities of the corresponding electrons were known, it was possible to check de Broglie’s formula. Davisson found that the theory agreed with the experiments within 1 percent to 2 percent accuracy.